Sufis: A Look at the Mystics of Contemporary Islam (vernissage)

Kif Kif, TOKO and the Arabic Studies department of the KULeuven present the beautiful photographs of Francesco Piraino. The aim of this exhibition is to show different facets of contemporary Sufism as a religious, cultural and human mosaic. You will (almost) not see a whirling dervish, but you will see the dhikr, the invocation and remembrance of the “most beautiful” divine names, and the zāwiyas (literally “angle” in Arabic), the places where Sufi meet, pray and study. 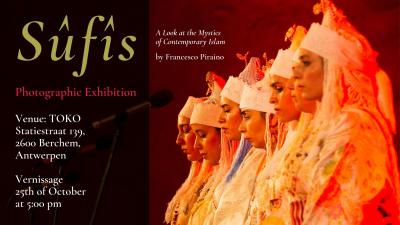 Commonly regarded as the “mystical branch of Islam”, Sufism has played a fundamental role in the history of Islam. Sufis have often been the custodians of the arts in Islamic societies, in music, poetry and calligraphy.

During the 19th and 20th centuries, Sufism was the object of a double attack. First of all, from the state institutions that regarded the Sufi brotherhoods as a possible threat to their authority and as an obstacle to the process of modernization. Secondly, by the Islamic reformists who regarded Sufis as irrational obscurantists complicit with the colonial powers and unable to face the challenges of modernity. This made some researchers believe that Sufism was a phenomenon ready to disappear in modern societies.

Nevertheless, Sufism experienced a period of renewal during the 20th and 21st centuries. New Sufi orders were born while others found new energies. In addition, during the 20th century Sufism spread in Western societies, partly thanks to the flow of migration but also attracting new converts to Islam.

In fact, another fundamental concept is the baraka, the grace or blessing that circulates among Sufi disciples and masters, thanks to rituals, but also thanks to these practices of everyday life. Sufism becomes a heritage to exploit, touristic places to visit, an image to sell and reproduce. That said, the relationship between Sufis and the media is not passive, because Sufis use the media to spread their doctrines and rituals, creating a virtual Sufism, which is expressed through technological tools. Moreover, in Sufi concerts / performances rituals are not simply staged, but re-elaborated somewhere between secular performance and religious experience. Finally, the Sufis have attracted the interest of the state powers in the Maghreb, who are in search of a religious legitimation in opposition to Islamism. Sufism and / or its image are used to better control the religious field. Hence, we will see the “participation” of the images of the King of Morocco Mohammed VI and former Algerian President Bouteflika in Sufi events.

This project has received funding from the European Union’s Horizon 2020 research and innovation programme under the grant agreement “Sufism, Ethics and Democracy”, Project ID 751729.

Francesco Piraino obtained his Ph.D. in Sociology in 2016 at the Scuola Normale Superiore (Florence) and the École des Hautes Études en Sciences Sociales (Paris). He is currently a Marie Skłodowska-Curie Research Fellow at KU Leuven. He is the director of the “Centre for Comparative Studies on Spiritualities and Civilisations” at the Cini Foundation in Venice. He has recently published Global Sufism: Reconfiguring Boundaries, Structures and Politics, co-edited with Mark Sedgwick, with Hurst, and in the journals Religiologiques, Social Compass, and Critical Research on Religion. He is also a photographer. His latest report concerns the religious participation of femminielli and LGBT movements in the Catholic pilgrimage of Mamma Schiavona in southern Italy.