This Is What I Read Podcast: Homegoing

Isaiah Lopaz is a writer and artist who is currently living and working in Brussels. We talked with him about 'Homegoing', the heart wrenching novel by Yaa Gyasi. The book traces the family lineage of two half-sisters. Effia becomes - against her will - the wife of the British governor of the Cape Coast Castle in Ghana. It’s a castle where enslaved people are being held before they are sold to western countries. Her half-sister Esi is being held captive in the castle before being sent to the United States. 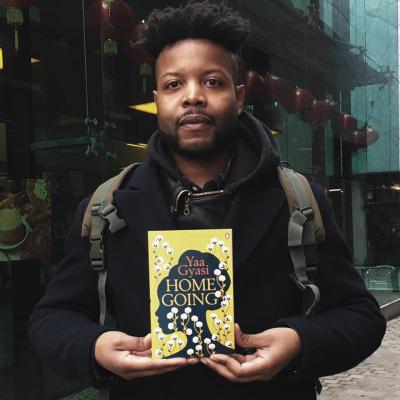 Below you can read an excerpt from the transcript. You can listen to the entire episode in je favoriete podcast app.

BPOC have to deal with racism, we have to dismantle it, there’s just no way of going around it. When did you start considering that there are power structures that work against you? When did that come to you?

I think I came at different points. I think as a child growing up in Los Angeles. For me Los Angeles also includes Los Angeles County where there are different cities that make up the greater Los Angeles area. But you know pretty much as a child. Your grandparents, your parents are basically explaining to you. I think it’s something that a lot of BPOC can relate to. You’re going to have to work twice as hard for half as much. I learned as a child very early that the world was an unfair place. In fact, my mom didn’t allow me to say something’s not fair. Because she would say Well, life is not fair. So, that word ‘fair’ is not even really part of my vocabulary. But I think, you know, as an adult, as a teenager you also sort of have different awakenings and I think probably the most recent one that I’ve had begun with my journey, moving to Germany and being racialized in ways that I wasn’t necessarily racialized in Los Angeles.

How did you end up in Brussels?

I had this lovely story where I had met this French DJ in Berlin at a gay bar and apparently we kissed. We met the next day, but I didn’t really remember that we kissed. I know that sounds really awful. But he was very sweet about it and he invited me to come and visit him, this was in 2010. So, I came to visit him and I found the city to be a really charming place. It was really cute. It was also this experience of seeing so many people of colour, which I didn’t particularly see in Berlin. And over these past few years Brussels has always kind of been in my periphery. And then I had a chance to do some work here as an artist and I said You know what? I need to be here. And I think what attracts me about Brussels as a city is that as an African American person, I feel like the kind of racism I experience in Brussels is more manageable, whereas in Berlin it was more violent, it was more in your face. And also, as an artist I was often being invited to speak about racism or to create work about racism for these white institutions and organizations, but when I would do that work, I would often face challenges.

When you say that the racism is more manageable, what do you mean by that?

There’s a lot of violence that I experienced, some of it was physical and some of it was more a rigid clinging to ideologies that are inconsistent and hurtful and lead to injustice and more violence. There were so many things that were happening, particularly in working environments, where again, I had been asked to do something or to prepare something and I was constantly dealing with racism. In Germany you don’t really have so much room to fight this. Because the laws and the anti-discrimination laws are not where they could be.

Why did you want to talk about this book?

I wanted to talk about 'Homegoing' because it’s a book that really resonated with me personally and I’m someone who’s very much interested in histories as they are told by the so-called ordinary people who live them, not necessarily by historians and I think particularly for people of Black African descent, how we tell our own histories is fascinating to me. I’m also a person who is very much interested in my family’s histories. And so, when I read the book 'Homegoing'… One of the themes for me is clearly that things are repeated throughout generations that you may not be aware of or you may not even recognize. And there are some things where you’re like okay because I know about mom, because I know about grandmother, because I know about great-grandmother I understand where this is coming from. And I think also just as a person of colour, when it comes to working through my own psychology, I’m very much interested in African traditional religion, shamanism. And one of the practitioners that I’m working with is very much saying everything is about the family.  Everything that you’re going through is about the family so reading this novel really grabbed me.

Do you know about the history of your own ancestors?

I know some things. As a person of Black African descent from the United States. My grandmother, my mother’s mother is Geechee and Indigenous and I didn’t know, we didn’t really know what Geechee people were for a long time, but they’re an incredibly beautiful, resilient people who were… Basically they were taken from what is now Angola, Mozambique, Madagascar, Senegambia, Sierra Leone, the Ivory Coast… And I feel like there are a couple of other places that I’m probably missing. But they were taken to Georgia, South Carolina and, I believe, Florida. And they were brought to grow rice. And because they were on the coast, the overseers and the masters lived on one part of land, and they lived closer to the coast and maybe just off of the plantation, so they had some autonomy. And they were also allowed to keep some religious traditions and also speak a form of Creole. So you know to learn about this and to learn that I come from that was incredibly liberating.