This Is What I Read Podcast: White Fragility

We sat down with Rachael Moore to discuss 'White Fragility', a must read book for anyone who is willing to deconstruct their way of thinking about black people and people of colour. But the book is also a very good resource for BPOC to understand the mechanisms behind why it's so difficult to talk about racism with white people. 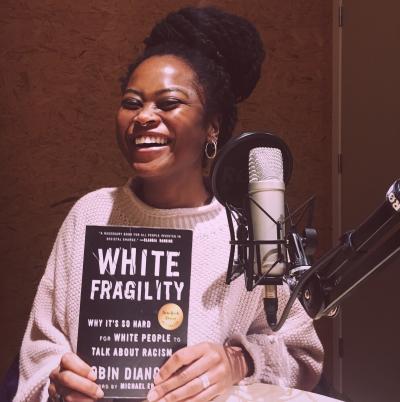 Below you can read an excerpt from the transcript. You can listen to the entire episode in your favorite podcast app.

She takes a lot of elements from her work as well, where you can see how she really breaks down certain conversations.

The examples were really well chosen in order to depict whatever subjects that she was speaking on. But it also gives a real-life case of the things that we encounter, the things that she has encountered. She also says that as a white woman she can choose to step away, she can choose to step out, but people of colour don’t have that choice. Black people and people of colour don’t have the choice to just stop. She is always recognized, people will never question her position as a white woman. And I think that’s a good realization to come to. But also expressing it in the book is very helpful. I think it’s different with a book because it’s not really… I mean, it’s a conversation, so she’s already pre-empting what the reader’s going to think and feel especially because it’s a white person. And that, I really did like. Because there were certain moments in the book where she said “stop, take a breath, you’ve gotten up to here, I know it’s been a lot, but we’re going to continue doing the work”. So, I felt that was really good.

It shows me now that white people are capable of putting in the work. It rids them of all the excuses they had before, because she was able to break it down in ‘white language’ for everybody else, so now everybody has to get to reading and start putting in the work. If they really want to change. See, for me, personally, after reading this book, I felt a bit more encouraged because it shows me that they’re capable. It shows me that they can if the will is there. And I just found it great that she took the time to write the book. And also, to give recognition to the countless BPOC that have done the work, you know, that she quotes from. She initially says in the beginning of the book that what she’s doing is nothing new.  She’s just breaking it down from a white perspective.

And she’s also very upfront and honest about it. She’s still is capable of being racist sometimes and has these blind spots, and she says it’s a lifelong learning curve.

All of this is lifelong. Everything that we’re doing, the fact that we live in this racist society, you know, me telling myself that I’m beautiful, that I’m worthy, that I am desirable, that’s a lifelong thing. If there’s a white person that reads this book and still thinks that we can find a quick fix for racism, then they need to just take a step back, and just continue on with their status quo, because they’re not going to help. And if you’re not going to help, then don’t show up.