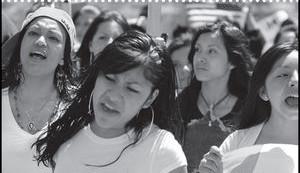 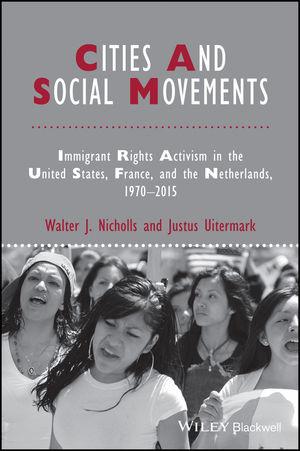 Cities and Social Movements : Immigrant Rights Activism in the United States, France and the Netherlands by Walter Nicholls and Justus Uitermark isn’t just a history of the struggles against anti-immigration laws. Instead of a classical analysis, which would mainly focus on the national arena, the authors focalise on the grassroots struggles and consider how the local scale is an essentiel component in the evolution of  any social movement. With their approach, the authors take seriously the role of the spatial dimension that underlies the development of social movements.

A clear pragmatist approach runs through the book. The authors certainly attach importance to the ideological contents of the social and political struggles that drive the actors, but to explain the spread of a social movement, Walter Nicholls and Justus Uitermark pay more attention to the process of coordination and articulation that brings together different organisations, collectives and groups and that contributes to the enhancement mobilisational capacities. As such, the analysis of these processes of articulation or entanglement are central to the book. Coordination processes are never won in advance, since they involve very different and sometimes even antagonist political, social, ideological and administrative actors: NGOs, radical leftist, undocumented activists with or without any previous political experience, first generation of migrants, second generation of migrants, etc.

Concerning such intersectional practices, the book reports some failures experciences. In particular, the case of Paris (in the early 2000s, when a centre-right government (Sarkozy), hardened the immigration policy and contravened the rules of human rights on several occasions) where we could see the skilled NGOs play a coordinating role by trying to gather all the organisations, including the undocumented activists. They didn’t succeed however. These NGOs totally marginalized the undocumented activists, who were organised in a collective, by denying their legitimacy to participate in decision-making. This greatly undermined the possibility for the emergence of a large movement.

The book also reports several successes, especially in Los Angeles where undocumented students (in 2010) strongly opposed to the actions of NGOs operating at the national level arguing that they were not legitimate to represent them. Specifically, these youngsters disagreed with the strategies of the NGO (a strategy considered too centralized and not sufficiently combative). They formed their own organization which got the support of a variety of (well-established) organizations with political, material and legal resources (organizations that have had  previously embedded activist migrants within them).  Because of such support and connections, they won a successful campaign at the national level and prevented thousands from being deportated. These connections were facilitated by strong networks which had been build up in Los Angeles during several years made Los Angeles, making the city a central hub for the immigrant rights movement thoughout the country.

Because cities intensively structure social relations and concentrate countless of resources, the authors consider them to be ‘high places’ of incubation for struggles.

Throughout the four emblematic cases in this original history of resistance and struggle for the rights of immigrants in the cities of Paris, Los Angeles and Amsterdam, the authors of the book also draw up a history of revolutions and counter-revolutions that have sought (and are still seeking) to curb and contain the force of radical discourses in favour of social, economic and political change. The authors analyse the different goverment’s strategies that tend to manage the population with migrant background and neutralise the political activities of the activist by invisibilisation, stigmatization, oversight, etc. The authors highlight different forms through which local governments manage these populations, seeing them either as ‘resources’ and/or as ‘threats’.

The authors use the concept of ‘Ethnic encapsulation’ to talk about the management of ethnicity, that is to say, forcing groups to organize on an ethnic basis and by subsidising them in this particular way. They explain how such policies (of ) neutralize discourse, control the population, and eventually dismiss various groups. Such policies also have the effect of assigning them pre-defined roles and pre-defined political tasks. Forced to pacificy themselves and to federate on an artificial basis, the different groups no longer have the opportunity to assert their ideological and political antagonisms. Consequently, instead of agglomerated social movements, the federations are contaminated by insidious quarrels. The authors, for example, describe this situation in Holland where tensions arose inside the Moroccan communitiy between the leftist immigrants, the conservatives of the federation of mosques and the second generation of migrants.

One. Ethnic encapsulation and the capture of political forces by the state management of minorities is multifaceted. Besides and beyond policies of social cohesion or interrogation, this ‘capturing’ of minorities, also occurs in the cultural and artistic field. In the case of ‘black communities’ , artistic and cultural public institutes try to bring groups together under an imaginary identity (the Diapora, the Afropeans, the Afropolitans). As a result, the groups indeed start quarrelling: they’re in competition with one another since they have so little programming and subsides, they don’t agree on the strategies, they loose mutual trust, etc. When it comes to cultural matters, it seems the logic is not encapsulation for control but rather an ‘ethnicity fabrication’ : to transform the ethnicity in a commodity which is going to be marketed. Thus the question arises: isn’t it necessary to be aware of these two different logics (a political managment and a marketing managment) that reinforce one another?

Two. Usually, (white) allies of minorities are often professionals on legal issues dealing with the human rights (allies who are often criticized because they often deal with individually cases or in a purely legal and not in a political way). When the claims of the second generations become more complicated (because it is no longer a matter of formal questions but of social dynamics such as the need to decolonise the mindsquestions), we may wonder whether these professional groups (of human rights defenders) will still be capable and/or willing to be allies? Are there any legal professionnal, who are working to redefine the boundaries of the legal field ? In particular : are there legal professionals trying to transform the rigid criteria of anti-racism laws to take into account institutional racism?

Three. What about allies within Francophone universities, characterised by a very low presence of ethnic minorities, where the production of knowledge rests on ‘ethnicising’ differences rather than questioning the ideological construction of ‘otherness’ and where the acadamic context which is more and more disconnected from the activist and militant field ? One could say that is a problem considering the decisive role of the intellectual in the development of social movement (as seen in France with intellectuals like Foucault, Deleuze, Derrida, etc.). In French-speaking Belgium, the enormous weakness of Universities in the research of the question of minorities is apparent. In what manner then, does this jeopardize the success of the movement as a whole? And what’s the situation in Flanders?

This book is available in the Kif Kif library. You can read it while drinking a cup of coffee (and, who knows, while having a nice conversation) in TOKO 139, Statiestraat 139, 2600 Berchem.