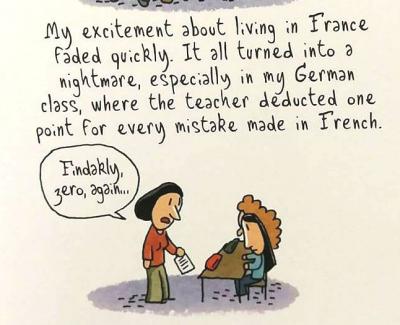 Brigitte Findakly’s brillant personalized account of the socially disruptive power of geopolitical conflict is a unique piece of literature. As a daughter of an Orthodox Christian father from Iraq and a Roman Catholic mother from France, Findakly grew up between both countries. In this autobiographic comic book (drawn by her husband, and colored by herself), she explores how political power plays, postcolonial relations and patriarchy intersect to shape the life of her and her family. It’s rather exceptional that an author succeeds so well in linking the structural dynamics of power with her own personal experiences who will speak to many people who have gone through similar situations.

Through minimalist scenes of everyday life, she explores the universal fears and sufferings of minorities in a politically unstable period. Born in 1959, her life history spans the largest part of postcolonial Iraq.  She reveals how the sequence of coups and counter coups in the first decade of her life, and the increasing international embroilment of Iraq’s Ba’ath party government in the next, put pressure on intercultural and interpersonal relations in Iraq. Pre-existing prejudices and distrust become ever more explicit and harder to overcome, occasionally erupting into violence.

When life becomes ever more difficult and with the imminence of war, her father, being a military dentist, decides to take his family to France. There they experience the postcolonial racism so familiar to minorities in Europe, and she describes its effects on their individual lives. Her father’s social status dramatically drops when his Iraqi diploma is not recognized and he cannot find a job. At school, she experiences harassment and is treated unequally by teachers. Her father starts dreaming of going back, but the sufferings of family members who have stayed behind and lived through nearly four decades of wars make them realize the utopian character of his longing.

Findakly discusses the spiraling of corruption, gender inequalities and interreligious violence in Iraq, but avoids a one-sided orientalist perspective.

Her experiences of growing up in a mixed family, and of discrimination and oppression as a female immigrant in France allow her to reveal crucial parallels between both countries. With subtle and at times humorous hints, she exposes the inconsistencies of the Western and the Arab gaze.

The parallels between prewar Iraq and today’s France serve as a warning against the racism and factionalism we are facing today, and what it might lead to in the future. Ultimately, her book is a call for transnational and intersectional solidarity: to not give in to the version of sexism, racism and religious hatred locally in store, Findakly examines the root causes of what drives us apart. In doing so, she shares with us an important and timely message.

Facebook has been facing heavy criticism in the last few years. But Mark Zuckerberg’s 2018 New Year’s resolutions to fix Facebook are bad news for anyone who cares about diversity in the field of media and democracy in general. A long read by Ico Maly.