A recalibration of the White Gaze in Kathryn Bigelow’s Detroit

Dossier: Kif Kif English
Volgen
After films such as Point Break, The Hurt Locker and Zero Dark Thirty, director Kathryn Bigelow's latest release is a reconstruction of police brutality during the 1967 riots in Detroit. Tunde Adefioye shares with us his views on the film.
cultuur
recensie
kif kif english 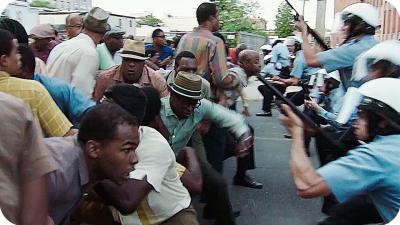 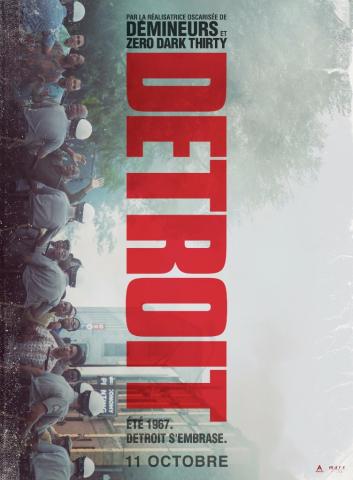 What if Bigelow had included the activism that was going on at the time?

After seeing Detroit, I could not help but wonder, how a person of color would have treated the depiction of the 1967 riots, the police brutality of the Algiers Motel incident or a similar topic. So I sat down to watch Ava DuVernay’s Selma, almost three years after it was released and two weeks after seeing the pre-release of Detroit in Brussels.

At one point in Selma, there is a beautiful scene in which the bodies of four Black girls are floating after a vicious bombing, almost dreamlike, in a red/fuchsia/purple sea of cosmic matter. One could claim this as an exaggeration and beautifying of a gruesome White male terrorist act. In fact, it is an extension of the aspiration the four girls were talking about right before their killing: to dream larger than life by being Coretta Scott King. This scene is the continuation of that dream.

Detroit on the other hand, was a tour de force of violence on the Black male body. Black male because as others have pointed out, this film rarely showed the same amount of brutality on Black women. As if Black women were not on those streets? It reminds one of the work that #SAYHERNAME  does to make sure female victims of police and domestic violence are recognized and highlighted, instead of being forgotten as often is the case.

The most vivid of this violence in Detroit happens when one character who has just looted a grocery store, is asked to stop by the police. Instead, he takes off running, his hands full of groceries, and gets shot from the back. He is slowed down but he is not deterred from getting away. The policeman who shoots him, calls him “quite a specimen” which in essence equates him to a beast. The police unit responsible for this was STRESS: a unit notorious for terrorizing Black people. A unit formed to “Stop the Robberies, Enjoy Safe Streets”, but that instead menaced Black neighborhoods. Mark Binelli’s The Fire Last Time touches on this unit and the horror they brought to Black Detroit.[1]

Such non-redemptive violence allows the white imaginary to continue to validate the type of violence that is still carried out on Black and Brown bodies till today. Brown bodies ravaged by a storm in Puerto Rico or the victims of Katrina in New Orleans’ 9th Ward: ”they are ‘resilient’ so let them wait, they can handle it.” As Mary Phillips points out, the Black body is seen as spectacle without displaying the nuance and “joyful” complexities in their lives.[2]

What if Bigelow had included the activism that was going on at the time? What type of film would we have if we got a glimpse of the “People’s Tribunal”, the parallel trial which included the likes of legendary revolutionary Rosa Parks serving as juror. Not to mention Black lawyer Kenneth V. Cockrel, Sr. who served as prosecutor and later created the League of Revolutionary Black Workers. Imagine if Bigelow would have used the true power of film magic to fast-forward a few years later to show the rebuilding that went on or the election of Detroit’s first Black mayor Coleman Alexander Young in 1974. Instead of focusing on violence, Bigelow could have hired Ta-nehisi Coates as a consultant and use his intricately researched and epic The Case for Reparations as a starting point to show how redlining illegally kept many Black families indentured and often cruelly pushed out of their homes.

The danger of Bigelow’s Detroit is that it allows the viewer, especially the white viewer, to once again see the most violent and ugly face of racism, without causing true introspection. Without causing the viewers to check their own microagressions, their own responsibility, their own privileges. Privileges that allow white men to frown down on quotas, for instance. Quotas that at least in the US context helped many kids that grew up in settings and violent neighborhoods that did not always foster the possibility to go to college and make something of one’s life. Quotas that helped someone like Michelle Obama leave the poor/ working class and currently ultra-violent Southside of Chicago to be at the top of her law school at prestigious Princeton University and later Harvard Law School. Quotas that might ask the mostly white men who sit at the head of many institutions (from governmental to cultural and educational) in Western Europe to re-think their hiring practices and try to enforce equality through drastic changes in laws. Laws that are used to institutionalize racism, such as the one banning religious symbols at work, can be turned around in order to fast track equity in the work place and beyond.

In DuVernay’s Selma, two white men are brutally killed on the streets by two other white men, after their answering to a call from Martin Luther King, Jr. for good meaning white people to come down to Selma to join the march across the Edmund Pettus Bridge. These two clergymen did, they left their safe haven in Boston to join the march. On a dark night during their planned return home they were viciously attacked with metal pipes. This type of nuance is missing in Bigelow’s film. You have the white police chief who admonishes the openly racist cop, but in the end we see that this scolding is nothing but a mere rap on the knuckles.

Bigelow did not need to make a feel good film about the uprising in Detroit. But one is left to wonder what that film would have been like if Bigelow had not only tackled police brutality and the impunity that is linked to it. There is undoubtedly a lot of sorrow that the people of Detroit have suffered and continue to endure. But there is a way to show institutional racism without harking on a long standing Hollywood tradition of showing how the justice system fails or just barely serves justice for a person of color. From To Kill a Mockingbird to Mississippi Burning to TV series like Law and Order, this trope is, for lack of trying, played out.

In his 1994 book Hard Stuff, former Mayor Coleman says it best: ”I don't dispute the gravity of Detroit's problems…They are basically the same problems that beset every American city, except that they are magnified by the fact that modern Detroit was built around the auto industry, which has been losing blood for two decades, and the accompanying reality that white flight, industrial and social, has left Detroit with the damnedest demographics in America.”[3]

[2]Phillips, Mary. The Huffington Post. “Detroit is the Most Irresponsive and Dangerous Movie of the Year.” 08.07.2017. https://www.huffingtonpost.com/entry/detroit-is-the-most-irresponsible-and-dangerous-movie-this-year_us_5988570be4b0f2c7d93f5744

On 24 November 1991, a relatively new party called Vlaams Blok radically redefined the Belgian electoral landscape with a first massive victory at the polls. That 'Black Sunday' sent shock waves through the Belgian political system, and its effects are enduring.